Praying with Julian of Norwich and the Hazelnut

The Vision of a Little Thing the Quality of a Hazenut

I count Julian of Norwich (1342-1416) among my mentors in the faith. Her writing has made a deep impression on me. I have also found her a congenial companion in prayer.
When she was 30 years old, Julian contracted a grave illness and came so near death they gave her last rites. At the end of her illness, she had several visions, or showings, that she understood to have come from God. She spent the next 20 years reflecting on these visions and writing down what she had learned from them. Perhaps, the most famous of those showings is this one:

And in this he showed me a little thing, the quantity of a hazel nut, lying in the palm of my hand, as it seemed. And it was as round as any ball. I looked upon it with the eye of my understanding, and thought, 'What may this be?' And it was answered generally thus, 'It is all that is made.' I marveled how it might last, for I thought it might suddenly have fallen to nothing for littleness. And I was answered in my understanding: It lasts and ever shall, for God loves it. And so have all things their beginning by the love of God.

In this little thing I saw three properties. The first is that God made it. The second that God loves it. And the third, that God keeps it. But what is this to me? Truly, the Creator, the Keeper, the Lover. For until I am substantially “oned” to him, I may never have full rest nor true bliss. That is to say, until I be so fastened to him that there is nothing that is made between my God and me.

This little thing which is created seemed to me as if it could have fallen into nothing because of its littleness. We need to have knowledge of this, so that we may delight in despising as nothing everything created, so as to love and have uncreated God. For this is the reason why our hearts and souls are not in perfect ease, because here we seek rest in this thing which is so little, in which there is no rest, and we do not know our God who is almighty, all wise and all good, for he is true rest. God wishes to be known, and it pleases him that we should rest in him; for everything which is beneath him is not sufficient for us. And this is the reason why no soul is at rest until it has despised as nothing all things which are created. When it by its will has become nothing for love, to have him who is everything, then is it able to receive spiritual rest. (1st Revelation) 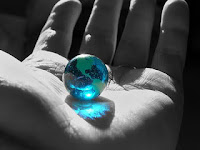 Seeing the fragile thing in the palm of her hand, Julian wondered, “I was amazed that it could last, for I thought that because of its littleness it would suddenly have fallen into nothing.”

Julian had reason to wonder if the world she knew might fall into nothing. As a child she lived through the Black Death, the plague that decimated Europe from 1348 - 1351. Nearly half of the city of Norwich died in a three-year span! The resulting social and economic disruption are hard to fathom.

The plague returned, though less virulently, fifteen years later. Some have speculated that she might have been married and lost her husband and children in this later plague.

Julian lived during the seemingly endless 'One Hundred Years War' between England and France.

In 1381, there was a major Peasants' Revolt resulting from years of injustice and unfair taxes.

The church was also in considerable disarray. In the year 1378, the Roman Catholic Church split in what came to be known as the Great Schism. For the next 68 years there were two popes (and for a short time, three!) claiming authority over the Catholic Church. This was bewildering and disillusioning to pious Christians.

And, as noted above, Julian had herself nearly died from serious illness.

Much of this sounds very contemporary. The world we know often seems chaotic, confusing, and tenuous with similar troubles. We, too, have reason to wonder if the world we know might fall into nothing.

In spite of her own suffering, and for all that the world around her seemed in disarray, Julian's writings, while distinctly not Pollyannish, are full of joy and hope in the light of God's love demonstrated in Jesus Christ. She found her ease, not in grasping and clinging to the ephemeral littleness of created reality, but in uniting herself to the abiding love and joy of the uncreated God. I have found in her an invaluable, inspiring, and edifying witness to the Good News.

What follows are three invitations to reflect on aspects of Julian's vision and a proposal for an experiment in prayer.

Meditation 1: God made it

Prayer: Praying with Julian's Hazelnut
Posted by Matt Gunter at 6:52 AM

Thank you for the blog post. I have just discovered Julian of Norwich and your posting was helpful and insightful. I even ordered the book you quoted from. Two years after your post, I wanted you to know God used it for His purposes. God bless.

I am glad you found it helpful. Julian is pretty wonderful. 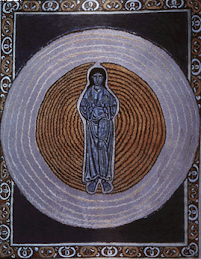